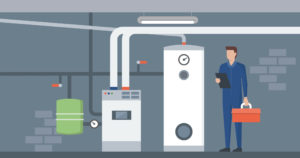 LESLIE: Brent in West Virginia is on the line with an HVAC question. What’s going on? You guys are freezing over there?

BRENT: So, I’ve got this two-level house that’s been cut in half. And then each level has been raised a half of a level, so it’s a four-level house.

TOM: So it’s a split-level house?

TOM: Forced air, OK. Got it. Alright. So your problem is that your lower level is staying cold. And what about your upper level? Does that overheat in the summer?

BRENT: It does but the issue is that in the summertime, I can close the vents downstairs and I can cool the upstairs. And the downstairs stays cool because it’s underground. But the reverse does not happen in the wintertime.

TOM: Right. I’ll tell you that the split-level house is one of the most difficult homes to get even heating and cooling. So, one thing that you could do is add an additional – well, first of all, you want to make sure that’s what there is working properly so you have good air flow coming out of the registers and you have good return of the air in the room going back to the HVAC system. So, we take a look at the return and the supply.

But I will say that probably the easiest thing to do is to add supplemental heat to cover you on the coldest days. That would probably be less expensive than running all the ductwork that you’d have to run to get it to work properly off just the forced air.

You could put electric based radiators in there, supplements. You could even put a through-the-wall heat pump, which is something actually that Leslie did to bring some additional temperature consistency to her lower room of her house. And I’ve got one in a room in my house that had some inconsistent issues.

And it just provides additional supplemental heat to be able to even out that space. Because otherwise, what you probably find yourself doing is you overheat the rest of the house when it’s really cold downstairs. You turn the heat up to try to get – make that downstairs warmer and then the upstairs gets very hot and you’re wasting a lot of energy on that heat. So trying to get that balanced out is the right thing to do.

I would tell you to install electric baseboards only because they’re the least expensive way to go. Even though they’re expensive to run, they’re the least expensive to install and you’re probably not going to use them 24/7. You’ll use them selectively, so that’s a situation where I would do that. And I would also make sure they’re hooked up to a central thermostat that could be operated by a clock-setback mechanism.

BRENT: How about that? OK. I will certainly give that a try.

Heating & Cooling Tune-Ups You Can Totally Do Yourself

Heating Zones: How to Create in Your Home

How to Get a Drafty Room to Stay Warm

Budget Friendly Kitchen Renovation Materials, Fire Resistant Insulation to Protect Your Home, How to Get Rid of Spiders and Keep them from Coming Back and more

Temperature Difference Between Rooms: How to Fix Uneven Heating and Cooling