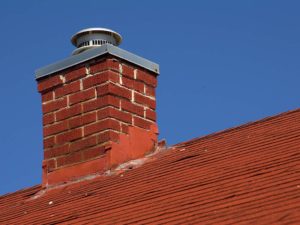 LESLIE: Next up we have Jeff in Tennessee who’s got a question about his chimney.

Jeff, tell us what’s going on?

JEFF: Well Leslie, we just bought this house – well I guess it’s actually been a year ago. But we’re noticing some spots on the ceiling in the room adjacent to where the chimney goes up to the outside of the house. And it’s water stains and I’m just curious as to what I can do about stopping that because it appears that the water is probably running down from the chimney along the roof somewhere and then eventually getting into leaking in that ceiling.

TOM: Why do you say, Jeff, that it’s running down the chimney? Because typically, the most common roof leak around a chimney is at the point where the chimney intersects the roof and it’s because the flashing typically wasn’t put in correctly.

JEFF: Well, the reason I say that is I feel like it must be running by, what you’re saying, that flashing and it runs – because of the slant of the roof it runs further down and then gets into the boards or whatever and then eventually leaks down to where it shows up as a stain, a water stain, on the ceiling.

TOM: Very often, what’ll happen with a roof leak is even if it enters around the chimney, it can actually run on the underside of the roof sheathing or the ceiling joist and drip down sometimes several feet …

LESLIE: From the chimney itself?

TOM: Yeah, exactly. It’ll get in and actually hang underneath on the joist and run down and drip off somewhere down below.

LESLIE: So your leak could travel.

TOM: Your leak could definitely travel.

Jeff, here’s a couple of things to check. Number one, you want to look at the flashing. Now if the flashing is done correctly – what kind of chimney is this? Is it a brick chimney?

JEFF: No, it’s got – like the rest of the house, it’s got vinyl siding on it.

TOM: OK. There should be a piece of flashing that goes up under the siding and also in between the shingles along side of it. If it was done correctly, you’re going to have a base flashing and the vinyl siding itself counts as the counter-flashing. The second thing to do is to look at the top of that chimney. Does it have a metal top?

TOM: OK. You need to take a look at that and see if there’s a joint between the flue pipe and the metal that’s missing its caulk. Because very often there’s a seam there and the caulk dries out and falls away. Or I’ve even seen those chimney tops when once you get up there – because you don’t get up there too often – that some of that flashing could be missing and that’s another place where water can get in. So check those two areas.

JEFF: No, nothing at all.

TOM: Alright. How old is this roof itself?

TOM: Alright, the other thing you need to check is this: fiberglass shingles is probably what you have; it’s a fiberglass-asphalt shingles. And in some of the very early fiberglass-asphalt shingles, they developed a severe cracking problem. And you won’t see it from the street. You’ll have to be right on top of it. But look carefully at your shingles and see if they are fractured. The fractures can either be vertical or horizontal and they very often follow the outline of the roof sheathing below. I’ve been on roofs, in the years I spent as a home inspector, where you could physically see the outline of a 4×8 sheet of plywood because the cracks in the shingles followed it all the way around. So check the roof shingles to make sure they’re not cracked because that could be another source of the leak. And if you see those, chances are it could have nothing to do with the chimney; it could just be a bad roofing shingle.

JEFF: Oh, OK. Now let me ask you a question about that. When I lived in Florida, people came around and put a white, latex-type coating. Can this asphalt shingle roof be coated and therefore sealed? Is that possible?

TOM: No, and I’m so glad you mentioned that because that is usually a ripoff repair. When you have asphalt shingles, they are never designed to be coated with a white, fibrous aluminum paint or any kind of a bright paint. There are, in some parts of the country, bands of gypsies and other folks that don’t necessarily have your best interest in mind that go around and claim to give your roof new life by simply painting it. A painted roof does not give it new life. The only kinds of roof that you ever paint are typically flat roofs and flat roofs it’s typically to cover them with a fibrous aluminum paint to reflect some of the sunlight. But you never paint an asphalt shingle roof; never, ever. So if you find a crack in a shingle, you’re just going to have to replace that section of roof.

JEFF: Thank you so much because I was about to get ripped off again. You’re right about the gypsies. Yeah. One of them came around and I had seen this done in Florida and I was just absolutely – I thought that was going to be the best thing going and you just saved me probably – I think they wanted about $1,200.

You know, the problem with some of those ripoff home improvements is they seem like they have some little element of truth, Leslie. It would seem to make sense that you could coat a roof and have it last longer. Seems like it makes sense but just not true.

Well Jeff, we saved you some money there in two different ways: hopefully to fix that roof leak and saved you from spending 1,200 bucks on a wasted coat of paint. Jeff, thanks so much for calling us at 1-888-MONEY-PIT.

Roof Repair or Replace? How to Know When it’s Time for Your Roof to Go!

Roof Replacement: When is It Time?

Install Flashing Around a Chimney

Fix Flashing Around the Chimney to Stop Leaks

Finding the Source of a Leak in a Chimney

Stop Rain from Leaking Through a Chimney