Tom Kraeutler: Welcome to this edition of the Money Pit’s Top Products Podcast coming to you from the 2014 National Hardware Show in Las Vegas. I’m Tom Kraeutler. 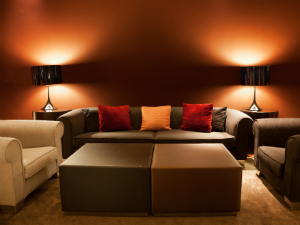 Tom Kraeutler: Well, energy efficient lighting has come a long way in the last couple of decades and if you thought you’d missed your old incandescent, you might be surprised to learn about what’s now possible with new technology LEDs.

Leslie Segrete: That’s right. Those newer LEDs out there have such cool elements like color changing technology. Here to tell us more about the lighting innovations from TCP is Dave Geraci. Welcome, Dave.

Tom Kraeutler: Tell us about TCP. I got to tell you I personally am I new fan because my electrician introduced me to TCP Recess lights. We replaced about a dozen of them in our house. I’m really happy with the quality of the light and the ease of installation.

Dave Geraci: Excellent. TCP has been around 20 years. We just had our 20-year anniversary this year.

Dave Geraci: Thank you very much. We’ve been making light bulbs since day one. That’s our business, that’s all we do. We started out with halogens and then we went into the CFLs when the CFLs first came out. It was actually the first energy-saving bulb. Now, we’re doing LEDs also. We do both sides of the market, we do commercial professional side of the market and we also do the consumer side of the market.

Leslie Segrete: Now, I’ve got to tell you, my sister and her husband they like whatever is newest and coolest in all of the technology. I would say a couple of months ago I was at their apartment in New York City with my sons and they had to put on their cool music for my little guys to listen to and then all off a sudden these light bulbs came on and started flashing different colors with the beat and doing the coolest thing and they were yours.

Leslie Segrete: How amazing that you’ve got these light changing bulbs that become almost like a club in your house. How does that technology work there where it detects the beat to change the color?

Dave Geraci: Well, it’s a lot of technology like you said in the bulb. There’s a lot of different LEDs in the bulb to make the different colors. It works on Bluetooth technology from your phone or your tablet whatever you have to the bulbs and then the same thing happens. If you have iTunes or whatever music you have on your phone, it detects the music in your phone and then sends a signal to the …

Leslie Segrete: It’s all through the app?

Dave Geraci: It’s through an app and it sends a signal to the bulbs to make it change in colors.

Dave Geraci: It sounds simple but it’s a little bit more complex than that.

Leslie Segrete: It’s got to be complicated. Are they very expensive? That seems like its a lot of technology?

Dave Geraci: It does not. It’s probably about $30 a bulb right now.

Leslie Segrete: That’s not a lot.

Dave Geraci: It’s not a lot.

Tom Kraeutler: That’s not bad because LED bulbs are costly because they last so long.

Tom Kraeutler: Besides the color changing technology, what are the cool things can we do with an LED that we couldn’t do with an old fashioned incandescent?

Dave Geraci: We have the connected line of products that we sell now which is wireless bulbs. It runs off of a gateway and you can control the bulbs again from your phone. It could be an iPhone or an Android. You can turn them on, you can turn them off, you can group the bulbs in different rooms and turn them all off or on at the same time. You control the light level so you don’t really need a dimmer anymore. You control the light level right on your phone. You can make schedules. There’s a smart controls function to this. You can make schedules, you can have the bulbs turned on at 8:00 and turn off at 12. If you’re at the hardware show for example and you want to make it look like you’re at home.

Tom Kraeutler: Let’s think about how far we’ve come on.

Tom Kraeutler: If you want to do that before, you had to hardwire everything, right? Everything had to be a home run. It had to go to a control panel. Now, you’re saying these are wireless. Essentially you just put them in any old fixture in your house.

Dave Geraci: Any fixture, any socket you have. It works in any socket.

Tom Kraeutler: Then they’re going to behave based on how you program them on your application.

Dave Geraci: You can do sunrise and sunsets so you have some landscape bulbs or outdoor lighting. You would set an account for yourself. Our Cloud would find out where you’re at and then it knows where you’re at and knows when the sun is going down or when the sun is coming up. It’s an astrological forecast throughout the whole year. You just set it on that and it changes by the seasons. It turns on at 9:00 in the summer and 5:00 in the morning and then 6:00 in the winter and later on at night.

Leslie Segrete: How simple is the app to operate?

Tom Kraeutler: We’re talking to Dave Geraci. He’s with TCP lighting and we’re talking about all the cool things that you can do with LED technology but I think on its core its important to consider the fact that the bottomline is an LED saved you a lot of electrical dollars.

Dave Geraci: Saved you a lot of electrical dollars. They’re about 75 to 80% less energy use than just a typical incandescent lamp. They last 2500 hours typically so they last a lot longer. You’re really going to get a good value for your money on an LED.

Tom Kraeutler: 2500 hours. You guys have in business that long, have you?

Dave Geraci: No, we haven’t.

Tom Kraeutler: You haven’t felt it yet?

Dave Geraci: I haven’t felt it yet.

Tom Kraeutler: Dave Geraci from TCP Lighting. Thanks so much for being part of the Money Pit’s Top Products podcast.

Tom Kraeutler: If you want more information on TCP you could check out their website at tcpi.com.

Switch to Led Light Bulbs to Save Money and Energy

Dimmer that Works with LED Lights