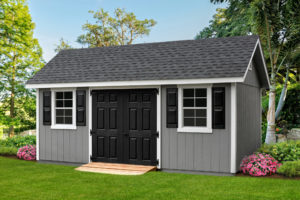 LESLIE: Margaret in New Jersey has a situation with a leaky shed. Tell us about the problem.

MARGARET: Well, yes, it was a brand new shed from the bottom up. It was set up on, I believe, cinder blocks and it’s at the shore, about two blocks from the beach, which gets a lot of rain and what-have-you. Now, it had a – I had a Therma-Tru door, which opens into the shed. It has no storm door. And about a year or so into – after the shed was built – I start to see on the left side, on the floor was rain or – in other words, water damage. And so – not thinking much of it but, in the meantime, I saw the bottom hinge of the door become rusted and was slightly away from the door; so I thought it was the door so I replaced it with a new door.

MARGARET: Now the following year – so the door was put in and the same thing happened, Only now I see water damage on both sides of the door; on the left and the right.

MARGARET: (overlapping voices) And in the interim now, this has been going on several years. Everybody I had to look at it, they didn’t know where the problem was coming from.

TOM: Well, first of all, this shed that you have; we’re talking about like a wood shed? Like a small building?

MARGARET: It’s a small building with siding on it.

TOM: With siding on it. OK.

MARGARET: Everything was brand new.

TOM: And how do we know that the siding is correctly installed and there’s not a flashing problem? Because that’s kind of what it sounds like.

MARGARET: Well, see, I did have the contractor look at it about a year or so later and of course he said, “You know, there’s nothing I can do about it.” He says, “Just put up a storm door.” And that was his answer. (Tom and Margaret laugh) So …

TOM: What he meant to say is, “There’s nothing I want to do about it, Margaret.” (Leslie and Margaret chuckle)

TOM: You have siding that’s probably not flashed properly around that door and as a result …

TOM: … you’re getting water between the door and the siding.

TOM: It’s not the door. That’s right. You had two great doors in there and they’re still leaking. Well, it’s not the door; it’s the siding. So what has to happen is – what kind of siding is on here?

TOM: You’ve got a door that’s not properly installed against the siding and what’s missing is the flashing. So I would recommend that you pull off the existing siding and that you would reflash that. Now, a good product …

MARGARET: All around the frame.

TOM: Yeah, all around. There’s a good product that’s made by the Grace Company. It’s called Vycor – V-Y-C-O-R – Plus self-adhered flashing. It’s specifically done to protect against air/water/moisture leaks and it works to basically seal all those vulnerable spots, like around window and door openings. Those are the hardest places to flash.

I would go to the Grace website; get some information on the product. It’s GraceAtHome.com, GraceAtHome.com, and it’s called self-adhered flashing; Vycor Plus self-adhered flashing. I think if you get the siding off and if you get it flashed properly, you’re not going to have any more door leaks and you can get back to the beach and enjoy that weather.

MARGARET: That sounds good. (chuckles) Thank you so much for your help.

Prevent Leaks Around Windows and Doors

Metal Roof for a Tool Shed

10 Tips to Build a Fence Even the Neighbors Will Love

Pour a Concrete Slab for a Shed

Greenhouses, Sheds and Outbuildings: What to Consider Before Building

How to Clean Outdoor Furniture, Finishing an Attic and Avoiding Ladder Injury

Install Flashing Around a Bay Window