by The Hosts Leave a Comment
Tom Kraeutler : Welcome to this edition of The Money Pit’s Top Products Podcast. I am Tom Kraetler reporting from the Consumer Electronics Show 2015 in Las Vegas, Nevada. Nest is a company that has reinvented home automation. They started with a thermostat, then carbon monoxide detectors and now they’ve introduced some partnerhttps://nest.com/smoke-co-alarm/life-with-nest-protect/ programs where they’re taking the functionality of other appliances in your house and making them even better. With me to talk about that is Leon Tan. Welcome Leon.
Leon Tan : Hi, how are you doing? 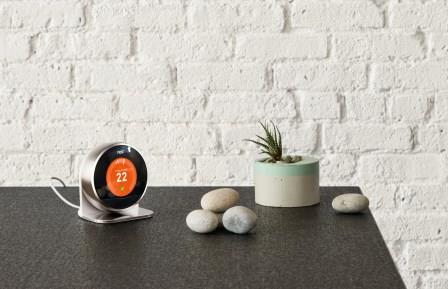 Tom Kraeutler : Doing well. Leon is with Nest Labs. What’s your role at Nest?
Leon Tan : I am product partnerships. I head up partnerships for our developer program.
Tom Kraeutler : Let’s talk about this developer program. To consumers they’re like, “What’s the developer program and what does that mean to me?” Can you give me some specific examples of some of the partnerships that you’ve formed and how that makes the house more functional for them.
Leon Tan : At Nest we believe in reinventing things in the home that were unloved. From that vision that we originally had we’ve moved into the next level of that vision which is building up what we call the conscious home, the thoughtful home. We know we can’t do that on our own. We can’t do that alone. We need to work with the best of the business so we launched a developer program back in June of last year, 6 months ago now. Right now we have about 1 in every 10 Nest homes have a Works with Nest innovation, which means you have something else in your home that is able to talk to the Nest product. We launched with a handful of partners in June and now we’re over 5,000 developers and that number continues to grow. Today we announced 15 new partners in lighting, in locks, in different apps and services, hardware, software. The developer program is really an open program that is platform agnostic whether you’re an IOS, Android, web, any developer can sign up big or small. We really encourage that.
Tom Kraeutler : Let’s get into some specifics. I really want to get into the consumer benefit of this Leon. For example, you’ve partnered with some appliance companies like Whirlpool and LG. What does the Nest thermostat, the Nest platform, do for my laundry? 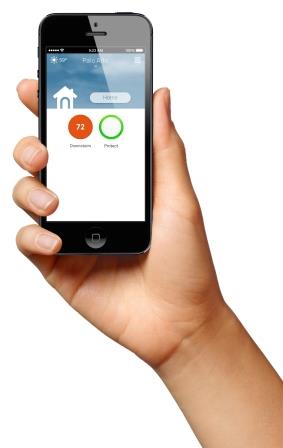 Leon Tan : We really want to think about thoughtful used cases. With Whirlpool for example, we have a program called Rush Hour Rewards. Rush Hour Rewards is what we have for the demand response programs. We have utility companies. The demand response is basically a window of the day during the summertime where electricity prices are higher, for them to turn on the new power plant. They want to avoid doing that. By avoiding doing that, we can dial down the thermostat during that window of time by pre cooling your home beforehand and cooling it after that window. We’ve now extended that capability for third parties like Whirlpool, which is another high energy consuming product in the home with washers and dryers, to go in an eco mode if it’s already mid way in a cycle during that Rush Hour Reward window, or delay that cycle to outside of that window to add another layer of savings.
Tom Kraeutler : A lot of this is based on vacancy. The 1 function of the thermostat that we enjoy, because I have 2 of the Nest students in my house, is that it knows when we’re home. It knows when we’re away. It can select temperatures appropriate to whether or not the house is occupied or not. If the house unoccupied, for example, with the laundry. I understand that this will come on and perhaps allow you to refresh your laundry if it hasn’t been run for a while, so rather than coming home to stale clothes that have been sitting in the washer and dryer all day, you can refresh them and have that load ready to go when you walk in the door.
Leon Tan : That’s a convenience feature. Then a safety feature we have recently announced today with LG is if you had accidentally left your oven on, for example, and you left the home, Nest knows when you’re home and when you’re not at home, it tells you that you left the oven on so you can remotely access the LG oven and turn it off from there. There’s convenience and comfort. There’s a safety aspect that we want to think about from our developer program. There’s an energy efficiency too Tom.
Tom Kraeutler : I understand that also there’s a functionality here where it can actually track you. If I’m driving home, it knows I’m coming towards home. Rather than relying on Nest to see the activity in the house and turn on then, it can actually know when I’m about to reach my house as to pre warm or pre cool the house based on the settings, correct?
Leon Tan : Correct. We launched back in June with Mercedes with that first partner. A few weeks ago we launched with Google now. Any IOS, web, or Android device through Google now will be able to set basically when you’re route home, and hots a certain threshold of when you’re on your way home and it starts pre cooling or pre heating your home based on your settings. Today we announced with Automatic, which is this $99 little plugin. It plugs into your OBD port in your car. That is able to automatically detect your driving patterns and figure out your path home. If they know that you’re heading home, it automatically does that for you without you even telling that you’re on your way home. 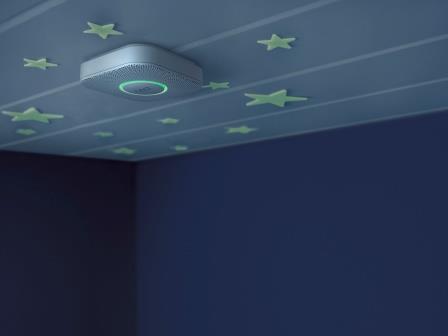 Tom Kraeutler : That’s very cool. We’re talking to Leon Tan from Next Labs. Leon, tell me about the Nest smoke and carbon monoxide detector. That was the second product that you guys brought out removing now into what we consider the fire season where home fires occur during the winter months with folk using not only their central heating systems, but also space heaters. How is your Nest smoke carbon monoxide detector redefining what carbon monoxide detectors, smoke detectors do for us? How is it different from what’s on the market today?
Leon Tan : Like we said from the start Tom, Next reinvents things that are unloved in the home. what we did with the smoke and CO alarm, which is now mandatory in a lot of states in the United States, is, it doesn’t just beep and screech at you an alarming sound. It warns you ahead of time when your battery is low. It warns you when levels are getting high before it gets to an unacceptable level by talking to you. It talks to you even in the native language that we ship in the different countries, the 7 different countries that we ship to today. That’s one way that we have revolutionized the smoke and CO alarms. The other way too is just nice thoughtful features where, what we call nightly promise. A green ring appears in the evening when you turn off the lights, about to go to bed. That green ring is basically gives you a piece of mind because it does a system check on battery levels, on connectivity, on different states of the sensors to make sure everything is good. You see that green ring. Everything is all right.Another nice little thoughtful feature we have is what we call path lights. As you walk by, the Nest protects in the middle of the night, which I’m doing right now because I have a little infant girl, it helps service a night light so I don’t stumble and hit myself against my bedposts.
Tom Kraeutler : When it comes to smoke detectors, there’s been a lot of press now of the importance of having dual detection, both ionic detection and photoelectric detection technology inside the smoke detector. What kind of detection technology does the Nest have?
Leon Tan : It’s able to detect obviously smoke and CO. We recently put out software update where it’s able to tell the difference between smoke and steam, because there’s a lot of false triggers based on whether you’re taking a shower, whether you’re cooking, and it’s steam versus smoke. It’s a feature that we call steam check. That’s one thing that’s been able to improve on the product. Motion sensors in the smoke/CO alarm, and also there’s a radio that’s able to talk locally, not having to depend on network of cloud connectivity. It’s able to talk locally with each other so it’s able to propagate the warning or emergency message throughout the home.
Tom Kraeutler : Very interesting. Leon Tan from Nest Labs. Thank you for the update.
Leon Tan : Thank you Tom.
GeneralPodcasts Top Products Podcast

Some Smoke Detectors May NOT Save Lives: Ionization vs. Photoelectric

Fire Prevention Tips Everyone Should Know

These 8 Tips Can Prevent Kids From Getting Burned

Safety at Home: Here Are the Top Danger Zones

How to Choose a Carbon Monoxide Detector

Fire Safety in a 2-Story Home