You are here: Home / How to Repair a Cracked Plaster Wall

LESLIE: Well, Tom and I both love our older homes but we know they come with their own set of maintenance issues, which really are brought on by all those years of service. And one of which we see a lot is cracks, especially those that form in plaster walls. 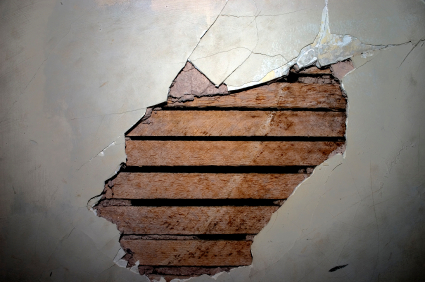 TOM: Well, that’s right. But when it comes to repairing cracks in plaster walls, you can’t just trowel on some spackle and call it a day. These walls need a bit more care to make sure that they can stand up for generations to come. Here to tell us exactly how to accomplish that is our friend, Tom Silva, the general contractor for TV’s This Old House.

TOM SILVA: Thanks, guys. It’s nice to be here.

TOM: So, we get this question so often. What really causes those plaster walls to crack? It seems pretty normal.

TOM SILVA: When they make the base coat of the plaster up, it’s soft. They trowel it and push it onto the walls. It goes in between those openings of the lath, forming a key or a lock to that. That’s how it’s held onto the wall.

TOM: So it circles behind the wood and then kind of grabs it and that’s the attachment.

TOM SILVA: Right. Right. So it basically forms a key or a T or an I, basically: the wall, the slot and then a big clump in the back. And when that breaks free, the plaster will fall off the wall in chunks; it becomes loose. You have to reattach it to the wall by using a metal ring or a washer and a drywall screw. And you just want to gently put the washer onto the wall, holding it in place with a drywall screw, screwing it into the lath. If you screw it too tight, you’ll crack the piece and it’ll fall out.

TOM: Yeah, good point. Now, so what we’re essentially doing is with the metal drywall screw on the washer, we are creating an alternative structural assembly, essentially, because the key is gone now, no longer attaching. We’ve got this loose plaster, which is pretty heavy, too. And this was in a ceiling, it could actually fall down and hurt somebody.

TOM SILVA: Oh, absolutely. The ceiling, that’s what happens. Big chunks will fall out of a ceiling if you don’t address the problem and fix it.

LESLIE: Now, you’re saying that we want to go with these rings and these drywall screws right into the lath itself. Finding the wood, I feel like any time you’ve tried to hang anything on a plaster wall, you take a stud finder and then everything is beeping.

LESLIE: So it’s like how do you know, essentially, you’re getting into that strip of lath?

TOM SILVA: You will know. As soon as you turn that screw and it goes through the plaster, whether you’re in between the crack or you’re into the lath. Because you will feel the tension.

TOM: And the nice thing about lath is if you do miss it, if you go an inch in either direction, you’re most likely to hit it, correct?

LESLIE: That’s such a delicate system.

TOM SILVA: Right. Another way to do it is I like to put the plaster rings on if I – and then put them randomly on the wall. Then I’ll take an old piece of screening wire out of a storm door and then take that screen, put joint compound on the wall, cover it well, take the screening wire and lay it right into the wet plaster and then compress it against the wall, oozing out all of the joint compound behind it. And now I created a screen mesh over the wall and it will never crack.

TOM: Ah, that’s a great tip. So if you’ve got a crack that really is persistent, maybe in an area where the wall tends to move a lot, like around a door opening or an archway or something like that, you could essentially reinforce that entire crack. First, secure it with drywall screws and the metal washers, then put the screening on top of that whole thing.

TOM: And you are so reinforcing that area that the crack just can’t reappear.

TOM SILVA: Exactly. Yeah, two coats of joint compound on top of it, sometimes three depending on how much the hole or the dent is that you’re trying to figure out. Not really a hole but a dent in the plaster. And I’ve had great luck with it over the years.

TOM: Great tricks of the trade. We’re talking to Tom Silva, the general contractor on TV’s This Old House, about how to repair a cracked plaster wall.

LESLIE: Now, what about drywall? I mean when you’re thinking about comparing drywall to plaster, making any sort of repairs to cracks in drywall has got to be a breeze.

TOM SILVA: Well, drywall, you don’t have to worry about that plaster, that hard surface, cracking. Drywall can crack but usually if it cracks or opens, it’s going to be a structural issue, because the house is really settling too much, or it was just basically installed incorrectly.

LESLIE: And I think, generally, a lot of the calls we get at The Money Pit, when you’re seeing a crack in the drywall, it’s essentially a crack in the joinery.

TOM SILVA: In the joint. Exactly, exactly. And usually, what happens there in lots of times is the tape wasn’t installed correctly. If they use a paper tape, the paper tape went onto dry joint compound and so it breaks away eventually.

TOM SILVA: So, you’ve got to retape it.

TOM: And speaking of retaping, one final point. I like that perforated tape: the one that sort of looks like a fiberglass mesh? Because, as you know, for the average do-it-yourselfer that doesn’t work with paper tape all the time, it’s kind of hard to get it right. You’ve got to make …

LESLIE: You have to finesse it.

TOM: You’ve got to have a solid coat of joint compound behind it. You get air bubbles. That fiberglass tape seems to be a lot more forgiving.

TOM SILVA: The fiberglass tape I like is the – because I use it, because I plaster and I joint compound and I use it for both. Lots of times, I may double up on it. But if – the paper tape is tricky. If you put a layer of joint compound on the wall on a joint or over a crack, if you wait too long and that joint compound hasn’t dried but skinned over, now when you put the tape on it, it’s not going to stick.

TOM: Yeah, yeah. And it gets kind of chunky and it doesn’t give you a smooth …

TOM SILVA: Right, right. The trick around that is if you’re waiting too long, wet the tape and put it on the wet joint compound and you don’t have to worry about it. It will really stick well then.

TOM: Hey, it worked for the plasterers, right, with the wet lath?

TOM: Alright. And it still works today. Tom Silva, the general contractor on TV’s This Old House, great advice. Thanks so much for stopping by The Money Pit.

TOM SILVA: Nice to be here.

How to Repair a Cracked Plaster Wall

Small Renovations That Add Big Value, How to Fix a Cracked Plaster Wall, Energy Saving Changes for Less Than $50, and more

Use Leap Year to Leap into Home Improvement, How to Fix Cracks in Your Plaster, Prep Your Home for a Party and More

Fixing Your Home for the Visually Impaired, Home Repairs in Less Than 30 Minutes, How To Tackle a Woodworking Project and More