You are here: Home / How to Finish a Basement

LESLIE: Well, most basements are a little more than a place to cultivate cobwebs and of course, store tons of cans of paint. 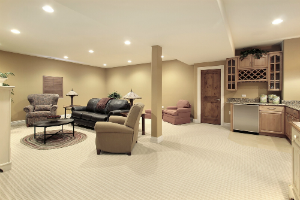 TOM: Ah, yes. But fixing up a full-height basement can dramatically increase the usable living space in your house, at a cost that’s far lower than adding on.

TOM SILVA: Nice to be here. Thanks.

TOM: So, not every basement is a good candidate for finishing, right? What are some key considerations before you start the renovation?

TOM SILVA: Well, water is the big enemy. You’ve got to make …

TOM: That would be followed by water and more water, right?

TOM SILVA: Water and more water because water is a big problem-solver. So, water and moisture, dampness, that’s the culprit that you have to deal with.

TOM: And we’ll start by talking about that, because I think a lot of folks think that water in the basement is always going to be a very expensive solution. But in the 20 years I spent as a home inspector, it always seemed to me that gutters and grading, followed by grading and gutters, were the number-one and number-two source – and clean gutters, right – of wet basements.

TOM: Because when that water comes in after the heavy rainfall, it’s always starting at the roof; it’s not a rising water table.

TOM SILVA: Exactly. I mean I would say that people don’t understand. First of all, they have to keep the gutters clean, because the water will roll over the gutters.

TOM: Every gutter installer out there only turns it out about a foot and puts another splash block for another foot, so you’re dropping it within 2 feet of the foundation, right in the backfill zone where all the soil is pushed back in the foundation, not as compacted.

TOM: And of course, it rolls right back in.

TOM SILVA: Exactly. And it will seep into the basement, causing all kinds of problems.

TOM SILVA: Exactly. And that’s why the idea of getting a building permit to do something helps you out, as a homeowner. The building inspector is not the enemy; he’s just trying to tell you how to do things right and making sure that whoever you hire to do the job gets it done correctly.

TOM SILVA: So he’s going to check. You want to make sure that there’s the right ceiling height. You don’t want to be lower than 6-foot-8. That’s the minimum.

TOM: And speaking of space, when it comes to basements, that is the place that all the utilities end up, for all of the obvious reasons, where the long plumbing runs are, the duct runs, the wiring runs. So, concealing all those is a key consideration of a basement-finishing project, right?

TOM SILVA: Yeah. Depending on the extent of the basement work that you want to do, it can cost you a lot of money to move a lot of that stuff. So you have to figure out ways to go around all of those things. And it can be tricky but it can make a huge, huge difference.

TOM: And of course, you don’t want to do something like wall over your main water valve.

TOM SILVA: No, you want to be able to – you can get to the water valve, in case there’s a problem upstairs in the house. And you want to make sure that you don’t close-in the electrical panel, because you have to have 3 feet of space in front of that electrical panel and it has to be seen.

LESLIE: And I think materials choice. I mean that’s got to be key in a basement space, especially because no matter what you do to control that moisture, you’re still going to have moisture down there just because of the inherent reasons of what the materials are. So you’ve got to look at drywall that’s not paper-faced, right?

TOM SILVA: Exactly. You want to make sure that you try not to use any product with cellulose, like wood fibers. That’s great breeding ground for mold. If you use a pressure-treated wood, it’s pretty good. I’d prefer a metal stud; it works great. I also want to make sure that I close off the area with a good vapor retarder or a vapor barrier.

So you either have to seal the concrete floor – because if the house is probably older than 50 years old, it probably doesn’t have a vapor retarder under the floor anyway. So you’ve got to stop that moisture from migrating up through the concrete.

And then you’ve got to make sure that you can seal the walls. Because if there’s not a sealer on the wall, you’ve got to worry about the moisture getting into the wall cavity. And foam insulation works great for that. You can spray-foam the walls. A closed cell is great because it’s water-resistant, waterproof and a great vapor retarder.

TOM: In terms of the framing of the walls, do you prefer to kind of frame basically against that wall or maybe leave a little gap, if you do metal framing?

TOM SILVA: Leave a gap. Yeah, you want a gap in your studs, whether it be wood – as long as it’s on a pressure-treated – there’s a gap between it that when they spray-foam, they can lay it in behind there.

TOM SILVA: If you don’t have the money or the budget to use a spray-foam insulation, what I like to do – and I’ve done it for years – is I take a polyethylene and actually staple it to the back side of the sill and let it droop down over the foundation and bring it out onto the floor. Then you can apply your pressure-treated sill to that frame …

TOM: Right on top of the polyethylene?

TOM SILVA: Right on top of the polyethylene. Then you stud up your wall.

And now, if you don’t want to use a spray-foam insulation, I’d use a mineral wall or a thermal-fiber insulation.

TOM SILVA: And then just apply it to the wall cavity. It makes a huge difference and it’ll save you some money if you don’t want to use the spray foam.

TOM: Sure. Now, let’s talk about the moisture that’s in the basement that’s left over. Let’s say that we did do everything that was necessary to get the water from coming in. But now, because of the – it’s below grade, we do have high humidity. What kind of dehumidification do you plan for?

TOM SILVA: Well, you want to have dehumidification. You also want to bring in fresh air, so you use an air exchanger, which would circulate the air on a regular basis.

Don’t use carpet. And use materials that are good for so-called “moist areas.”

TOM: I’m so glad you mentioned that carpet thing, because that’s sort of a pet peeve of ours. So many folks have carpet in the basement and it’s just a breeding ground for everything that’s not good for your air.

TOM SILVA: Right, right. Well, they have laminate floors and vinyl floors and tile floors that you can use.

TOM SILVA: Yeah, to dress up …

LESLIE: You can get that same coziness.

TOM SILVA: Yeah. I love area rugs because it adds a little bit of a color to the space and it defines the area. And it’s great for wear …

LESLIE: I sense a frustrated decorator in Tom Silva. He’s like, “I also do interior design.”

Tom Silva, the general contractor and sometimes decorator on TV’s This Old House, thanks so much for stopping by The Money Pit.

TOM SILVA: Well, thanks, guys. It’s nice to be here, as always.

Tips to Finish Your Basement Ceiling

How to Finish Floor of Yankee Basement

How to Finish Your Basement, Drill and Drill Bit Basics and More

Waterproofing Finish is Flaking Off the Basement Walls

How to Finish Concrete Basement Walls for a Home Office