TOM KRAEUTLER: Welcome to this edition of The Money Pit’s Top Products podcast. We are broadcasting from Greenbuild 2012 in San Francisco. This is a tradeshow that is dedicated to demonstrating some of the newest technologies to make your home more environmentally friendly. And we are seeing one here today from GE. GE has a new line of LED and CFL light bulbs that meet the current standards, however they actually look a lot like the old-fashioned bulbs and that is something that consumers have really come to need. We’ve got a lot of light fixtures out there that the new-fangled bulbs just don’t fit anymore and GE has some very energy 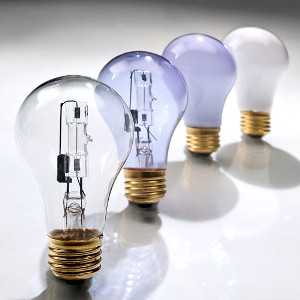 efficient options to help with that. Joe Howley is the Industrial Relations and Environmental Manager for GE. So, Joe, tell me about the origin of these bulbs. Consumers go into a store today and they see a lot of bulbs and they don’t recognize them anymore. You guys are trying to help with that by kind of going back to the old shape. If for no other reason, is it just so that our lampshades will actually fit again?

JOE HOWLEY: Certainly that could be one of the reasons, Tom. Today we are introducing a lot of new products due to federal regulations that are eliminating the standard 100 watt, 75 watt, 60 watt, and 40 watt light bulbs from the market. The 100 watt we stopped manufacture at that beginning of the year. We will no longer make the 75 watt next year in 2013, and then the 60 and 40 watt will no longer be produced in 2014. But not to worry, we will have a lot of very nice options for consumers to pick from and some of them look exactly the same as the incandescent lamps they know and love. [00:01:42]

For instance, using halogen technology, we are introducing products that have the same light output and light quality, dimmability and sparkle as incandescent, but using a halogen filament tube and using about 35 percent less energy. So the 100 watt now will only use 72 watts of energy, but produce the same light output as a 100 watt. The 75 watt will go down to a 53 watt lamp, and then the 60 will only consume 43 watts and the 40 will only consume 29 watts when made with halogen technology.

They will be slightly more expensive than your standard incandescent lamp—let’s say approximately $2.00 a lamp and they will save you about $3.00 to $4.00 over their lifetimes, depending on what your electric rate is. [00:02:29]

TOM KRAEUTLER: Now one of the advantages of LEDs and CFLs is how long they last compared to incandescents. What happens with halogens? Do they last longer than the old fashioned, at this point, incandescents?

JOE HOWLEY: No, halogens—they will last about the same as you are used to with incandescent. The 60s and 40s are rated at 1,000 hours, which is the same as the current technology. The 100 and the 75 watt lamps are rated at 750 hours today. The halogens will last 1,000 hours. So they are about 250 hours longer at the higher wattages but they will last approximately a year in most applications. Very similar to what you are used to today with incandescent.

TOM KRAEUTLER: Do you think that these halogens are going to phase out as well? For example, when energy efficient light bulbs became more of the norm, we saw CFLs being really the only option. And there were some early complaints about CFLs. The color wasn’t there. They flickered. They didn’t work with dimmers. Now we are starting to see that CFLS are becoming less prevalent in the market; LEDs are becoming more prevalent in the market. Is the halogen bulb kind of a stepping stone to get us up to maybe LEDs where this efficient light bulb design seems to be going? [00:03:39]

JOE HOWLEY: I suppose you can look at it that way, because these lamps start the same, dim the same as incandescent. There are a lot of applications where people want all of those qualities. But certainly there are other applications in your house where people are looking for long life lamps and they are looking for low energy using lamps and that is where CFLs and LEDs come in. Now CFLs are still our most popular energy efficient light source that we make and sell—still far more economical than LEDs from an initial purchase price standpoint. So we still sell a lot more of those in the industry than we sell LEDs. Everybody is, though, looking forward to a time when LED prices will come down, which everybody is projecting they will in the next few years, and then LEDs, we believe, will ultimately become more popular than CFL lamps. Today, though we are still at just the very beginning stages of selling the LEDs because of the high price points and we expect LEDs to do well and to sell much better in future years. [00:04:46]

TOM KRAEUTLER: Now speaking of the technology and when people are accustomed, a staple of the modern office—I wouldn’t even say the modern office—a staple of office life today is the fluorescent lamp, right? We are sitting here in your booth under what at very first glance and just a brief glance could look like a standard fluorescent lamp. It is actually quite different. It is a clear piece of glass that, once you turned on, became a light fixture. And this is done through LED technology, correct?

JOE HOWLEY: That is correct. We are going to be able to do some really cool stuff that we were never able to do with fluorescent technology. Today the efficiency is about the same. The life of LEDs are projected to be longer—perhaps two to three times longer—which means much lower maintenance costs. Today the cost of the LED fixtures are higher than fluorescent systems, but also projected to come down. And clearly these LED panels are going to compete with fluorescent technology. They are starting to compete today, but they are going to compete in future years very aggressively and many buildings, we believe, will move to these panels in the near future. [00:05:58]

TOM KRAEUTLER: And as a result, the price of the technology will continue to go down and down and down because you are going to have more consumers and more commercial users investing in them, correct?

JOE HOWLEY: That is what we are projecting, yes.

JOE HOWLEY: Well, with the LED, today we have LED products that are projected to last 22 years and we have a 60 watt replacement that will consume only 13 watts of energy. We also have a 40 watt replacement that uses nine watts of energy. Those are two products that are available today on the marketplace. Currently the price levels vary, but they could be quite high depending on the retailer. We are talking about maybe $40, $50, $60 per bulb at this point. [00:07:11]

JOE HOWLEY: Yes, that’s correct. And perhaps people will think differently about LED technology. What we believe, though, as the volumes come up—and we are starting to sell these more in commercial applications that have long operating hours, such as, say, hospitality, hotel, motel, restaurants, retail, that burn them for a long period of time. And as they drive volume up, this will allow us to bring costs down on these products. So look for the price levels to moderate over the next few years. In the meantime, we do have the Compact Fluorescent Lamps that you mentioned. We are starting to make some Compact Fluorescent Lamps that have better dimming technology. We have both a 60 watt and a 100 watt that we have introduced recently that are dimmable. Most Compact Fluorescent Lamps will not work with your dimmer. As soon as you try to put it on a dimmer, you will find this out because it will start to flicker and immediately go out and simply not dim. The dimmable type, typically though, can go down to maybe 10 to 20 percent of their light output. And although it is not as deep as incandescent, it provides acceptable dimming in most applications. [00:08:44]

JOE HOWLEY: Well, the Bright from the Start technology is trying to address an issue where—with the spiral CFLs that most people are familiar with, they turn on reasonably fast, warm up reasonably fast, and people are okay with them. But a lot of people don’t like the spiral, so they want that lamp to have a cover on it that looks very similar to the incandescent lamp. When we put a cover over it so it looks like an incandescent lamp, we have to use amalgam in that lamp which—it is a technical term for designing in a way that maintains light output as it operates in a warmer environment, but it also means it is going to take awhile to warm up. It could take up to a minute for it to warm up. And a lot of consumers do not like to wait a minute for their Compact Fluorescent Lamps to warm up. So to address that problem, we have introduced Bright from the Start where we put a halogen filament tube inside the Compact Fluorescent Lamp. When you hit the switch, that will immediately come on to full brightness just like an incandescent lamp. After about minute, about 60 seconds, that halogen lamp will go off, which is the time it takes the Compact Fluorescent Lamp to warm up to full brightness. So once the Compact Fluorescent Lamp is warmed up, the halogen lamp then shuts off and then you are back to only using, for instance, 15 watts of Compact Fluorescent light to replace a 60 watt. So you get that energy savings and long life. [00:10:15]

TOM KRAEUTLER: That is really interesting. So it is really two lights in one. The halogen comes on and gives you the instant brightness and then it ramps down as the CFL starts to ramp up.

JOE HOWLEY: That is correct. It is very clever technology and it is selling quite well.

TOM KRAEUTLER: And finally you have the energy efficient Soft White Bulb. What does that do for us?

JOE HOWLEY: Well, I think there—with the Soft White we are talking back to the halogen technology. We call it Energy Efficient Soft White is how we are marketing it. But early in the conversation we were talking about the halogen technology that looks, acts just like an incandescent lamp. When we talk now about Energy Efficient Soft White, we are really talking about an incandescent lamp that has a halogen filament tube and gives you about a 30 percent energy savings.

TOM KRAEUTLER: Lots of innovations from GE. Joe Howley, Industry Relations and Environmental Marketing Manager, thanks so much for filling us in and stopping by The Money Pit’s Top Products podcast.

Led Bulbs Save Energy, Money and Help the Environment

Can I Exceed My Light Fixtures’ Recommended Wattage Limitations?