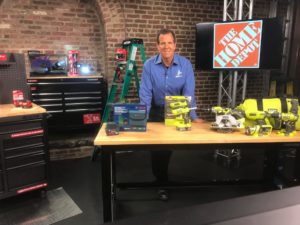 by Tom Kraeutler Leave a Comment [Sponsored by: The Home Depot]

Hey. It’s Tom Kraeutler from The Money Pit with some great gift ideas for Father’s Day coming from The Home Depot. For a tool geek like me, I love this time of year because there’s lots of new technology out there.

Let’s start by talking about the Ryobi ONE+. This is the 18 volt, lithium ion, ultimate combo kit. Ultimate is a good name for it because it includes all the tools that your dad’s going to need around the house. You’ve got a compact drill. You’ve got a reciprocating saw, an impact driver, and you’ve got a circular saw with a laser guide. Now, plus there’s also two 18 volt lithium compact batteries. Those are compatible with any ONE+ product. There’s over 70 of them so it’s kind of a system you can kind of expand. It includes the carrying case for 199.

Another one of those new ONE+ products is this. This is the ONE+ glue gun from Ryobi and it works with all purpose high strength adhesives, for all sorts of heavy duty gluing applications. I like the fact that it’s self standing, so it’s not going to fall over. It’s not going to leak glue all over the place like most glue guns. It’s got a two finger trigger so you get really good control of the flow of the glue that comes out there. The ONE+ line is great for dads that are just starting out.

Let’s say that Dad has everything. Why not give him a place to store it. That’s what this is. This is the Husky 60 inch, 10 drawer, textured black matte mobile work bench. It’s a heavy duty work bench that’s actually six inches deeper than standard rolling tool cabinets. Take a look at how dep that drawer is. You can get a lot of tools in this work bench. In fact, it is designed to hold 2,200 pounds. Now, all the drawers have self closing liners in the as well. The drawers themselves actually hold up to 11 pounds. I’m going to do a little test here so you can see how sturdy this is. This is a 16 pound sand bag. No problem. It takes it without an issue whatsoever.

It’s got a peg board that holds about 200 pounds itself, beautiful work top. It’s got outlets on the side, USB ports, so really nice product here from Husky, exclusively at the Home Depot.

Also from Husky, let’s talk about flashlights. Now, most of us have what, five or six of these things in our house because usually one or two of them work at a time. This is the Husky Lumen. It’s a virtually unbreakable aluminum flashlight. Now, first off, it uses a cree LED, so it’s going to get a really extra bright, sharp light coming out of it. It’s also waterproof up to one meter and it comes with a lifetime warranty.

Now, how do we know it’s water proof? Well, take a look at my fish tank here. We stuck a couple of flashlights in it. They have been on for hours, underwater, not a problem. Right next to a block of ice with flashlights in it showing that these can work in cold weather, or wet weather. This the kind of product I’m going to want to have one in my car, one in my garage, a couple in my house. I’ll never have to worry about them not working when I need them. It’s around 9.97 for this at Home Depot. That’s a really terrific gift idea right there.

Now, there’s a lot out there now in technology that can help a dad that maybe has everything. Let’s start with the Milwaukee Tick. It’s a tool and equipment tracker. Now, what this does is it attaches to your tool or your equipment so it could be a ladder or a drill. It’s going to allow your dad to know exactly where his favorite tools are at all times. It’s got a one year run time, and it’s powered by the One-Key app. That gives you a tracking beacon anytime, anywhere, right to Dad’s smart phone. You’ll always know exactly where the tool is. If you loaned it to somebody or if you just misplaced it yourself, the Tick will show you exactly where it is, 29.97 for the Tick.

Also, I that high tech arena is a new laser level. This is from Bosch. It’s the self leveling cross line laser. I like this because it’s handy for so many projects around the house. The laser works in three modes, vertical, horizontal and cross line. The beams are up to four times brighter than standard red beams. It’s got a range of up to 100 feet. The accuracy is really unmatched. It has Bosch’s exclusive VisiMax technology so it always gives you that super bright line visibility while you work, 229.

Now, if Dad likes to listen to music or the radio while he’s working, take a look at the Dewalt. It’s the 12 and 20 volt worksite charger radio. It’s going to charge your tool batteries and it’s also going to play music at the same time. It features a 12 volt or a 20 volt max Dewalt battery charging packs built in. It also has two AC power outlets for increased job site power. It’s got a USB port, $169.

What I love about this time of year is when you think something can’t change, the manufacturers come up with new technology to make it even more useful. For example, sandpaper. You think sandpaper hasn’t changed in the ages. You got to check out the Diablo Grit SandNet. This is a disk that actually gives you about 10 times better sanding power than a typical disk. Basically, it’s designed in sort of a net way so that the particles that are being sanded off, will fly off it or it can be washed out of it. You’re never going to have the paint that kind of grabs into it. You can clean it and reuse it multiple times by shaking it or vacuuming it or rinsing the disk to remove that built up. That’s great new innovation.

Then finally, this is from Milwaukee, and it’s called the Premium Magnetic Tape Measure, heavy duty, reliable, perfect gift for any dad, very durable, very tough. It’s got nylon bond blade protection and a five point reinforced frame. It really can stand up to just about anything. I checked it out by giving it a few wacks with this hammer. It had no effect on the case whatsoever. Also, it’s got a finger stop built into it. Have you ever done this with a tape. You let it slide back and you crush your finger? It’s got a stop built into it so that doesn’t happen. They’ve kind of thought of it all.

If you need a gift for Dad, whether he’s a DIYer or a pro, you’re going find it at your local Home Depot or online at homedepot.com.

Surprise Dad with a Garage Workshop on Father’s Day

A Great Gift for Any Dad: Stanley 3-in-1 Flashlight

Dads to make do with less this Father’s Day

Stanley TLM65 Laser Distance Measurer is Easy to Use | Video

How to Quiet a Loud House, Spotting Termites in Winter, and DIY Master Bedroom Ideas – In Time for Valentine’s Day